In September 2013, The Centre for Health and Society (CSS) celebrated the 150th anniversary of the Municipal Hospital which was designed by architect Christian Hansen and opened in 1863.

In 2013 – 150 years later – we celebrated the anniversary of the Municipal Hospital with the opening of a new building on the grounds of the old hospital.

The new building (building 35) on Gammeltoftsgade which was in use by students and members of staff from 1 September, was officially opened on Friday 20 September 2013, the day after the Municipal Hospital in 1863 welcomed its first patients.

See photos from the official opening (text in Danish)

The building consists of office spaces, lecture halls, a faculty lounge and café as well as the municipal kindergarden ‘Den Grønne Kastanje’ (‘The Green Chestnut’) which is housed in part of the ground floor.

The exhibition: 'From Hospital to University'

The exhibition 'From Hospital to University', planned in collaboration with the Museum of Copenhagen, was open from 20 September to 19 December 2013. The exhibition was also part of Culture Night (Kulturnatten) on 11 October where several hundreds of people were given guided tours around campus.

The exhibition which had a visual focus, showed the history of the hospital though 150 years. Specific areas ('points in time') on the grounds of the hospital showcased, in written text and visual imagery, what the area used to look like when the buildings were still used as a hospital.

The exhibition was part of a special event on the annual Culture Night (Kulturnatten) on 11 October. The event consisted of guided tours and lectures and hundreds of people visited campus for a night-time guided tour - both students and staff and members of the public took part in the event.

As part of the guided tours there was given public access to several of the historic buildings and rooms which normally have restricted access including the church under the Dome.

The canteen - Simply Cooking – stayed open for Culture Night as part of the anniversary celebrations and served, for one night only, selected dishes from the 1863 hospital menu!

See photos from the Culture Night event at campus 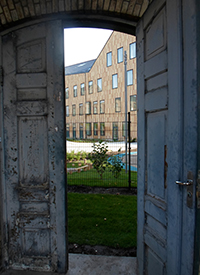 The Faculty launched, as part of the anniversary celebrations, a photo competition to win an iPad mini.
The competition ran until 13 September and the winner was announced on 20 September.
A selection of the entries was displayed in the new building on Gammeltoftsgade during the official opening.
The winning photo was taken by Solgerd Just Mikkelsen (faculty administration) through an old door with view to the new building, titled 'old meets new'.